This university is considered a success story in Colombia and in the international context. The progress of the English level in the organization is evident, due to their commitment with the language development for students, the setting of objectives and goals achievement tracking, where the EDE and TECS have played a paramount role to actually identify weaknesses, strengths and measure the advance of language proficiency of the students. Area Andina University has a clear language policy since 2012, by creating a project called Plan Institucional de BIlinguismo Areandino – (PIBA) Areandina Instituional Plan for Bilingualism, which main features are:

English courses to all the university students.

The organization set the TECS as graduation requirement since 2015, in order to follow up and reach English as Foreign Language goals, with the aim of giving access to a wider range of opportunities to the university illumines that would have differentiated skills in their jobs as professionals. More than 10.000 TECS tests have been taken by the students of this universities, which has been enough to run an analysis where the progress in the English proficiency of the students is an achievement for the university.

The TECS has been a tool used not only for certification of English proficiency level, but also to track the organization performance in second language development.

The following chart shows how in 2015, 30% of the students who took the TECS were in A1 level according to the CEFR. In 2016 and 2017 this amount decreased to 11% and 12%, and the student population was placed between A2 and B1 level, showing and advance in their English proficiency. 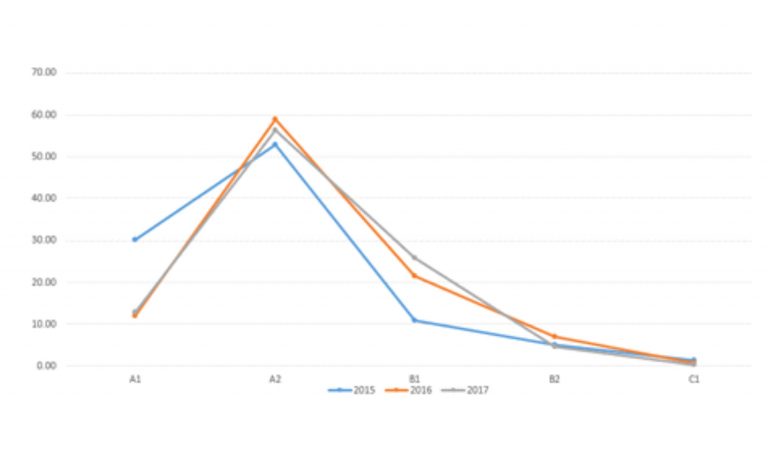 This graph is more explanatory, as it shows how in 2016 and 2016 (orange and gray lines) the amount of students in higher levels A2 through C1 increased, as compared to 2015 blue line.