The Test of English Communication Skills – TECS, results are presented in three different score formats. The certificate shows the performance of the individual in each specific language skill assessed by individual test modules as follows; speaking, language Use, listening in context and texts interpretation.

The test presents the Total Percentile Skill, which is the average of the performance of the test taker in the four communication skills. This score is converted to the CEFR level taking into account its descriptors.

It also shows the TECS proficiency stage, which is a scale of the English proficiency level of the test taker; zero (0) being the lowest stage and five (5) being the highest stage. These stages are the result of the percentile analysis allocated in five different groups according to the test taker’s performance compared to other test takers and their knowledge of English. This percentile score not only gives the test administrators and institutions an indicator of the test takers performance, but also represents how well the test taker performs as compared to other test takers in a worldwide norm sample, taken from the complete scores database of the TECS, resulting in a more accurate reading of the English proficiency of the individual.

The scores are taken to the field of the Common European Framework Reference of Languages (CEFR) for a standardized description of the English proficiency of the test taker from A1 to C1 Level. The certificate also shows the level descriptor according to the CEFR for the reader to have a better understanding of what the test taker is able to do with the language.

In order to comply with the most recent research on language development, taking into account the amount of countries that have set their language policies in accordance to the Common European Framework of Reference for Languages;  the academic team has updated the levels of the TECS Certificate, according to the descriptors of the latest version of the “CEFR Companion Volume with New Descriptors, 2018” as part of the Language Policy Program of the Education Policy Division from the Education Department of the Council of Europe.

As mentioned in the document, this updated version does not change the descriptors, but supplement the existing ones, among other changes, to better reflect that the C2 level descriptors do not take a native speaker as a reference for such competence.

Taking the above into account the levels descriptions would better reflect the different user communication skills, without these descriptors having the intention to be absolute, but a transition from a basic user to an independent and proficient user.

The updated level descriptors provide a roadmap where the test taker exhibits its knowledge in a progressive way, subdivided in broad bands of proficiency that, according to the document, are like a rainbow where language proficiency is a continuum where language mastery transitions from one level to the next one.

The following chart shows the scores in terms of inequalities to better reflect both the English communication skill level transition and the boundary with the next level, thus the symbols greater than ( > ) or Less than ( < ) represent the limit of the score. These limits are clear and discriminatory, where the number on the left or right of the symbol includes decimal figures that separate the proficiency description of the test taker, taking into account the mentioned mastery transition.

Below the score, TECS proficiency Stage and its corresponding CEFR Level and ILTO level description. 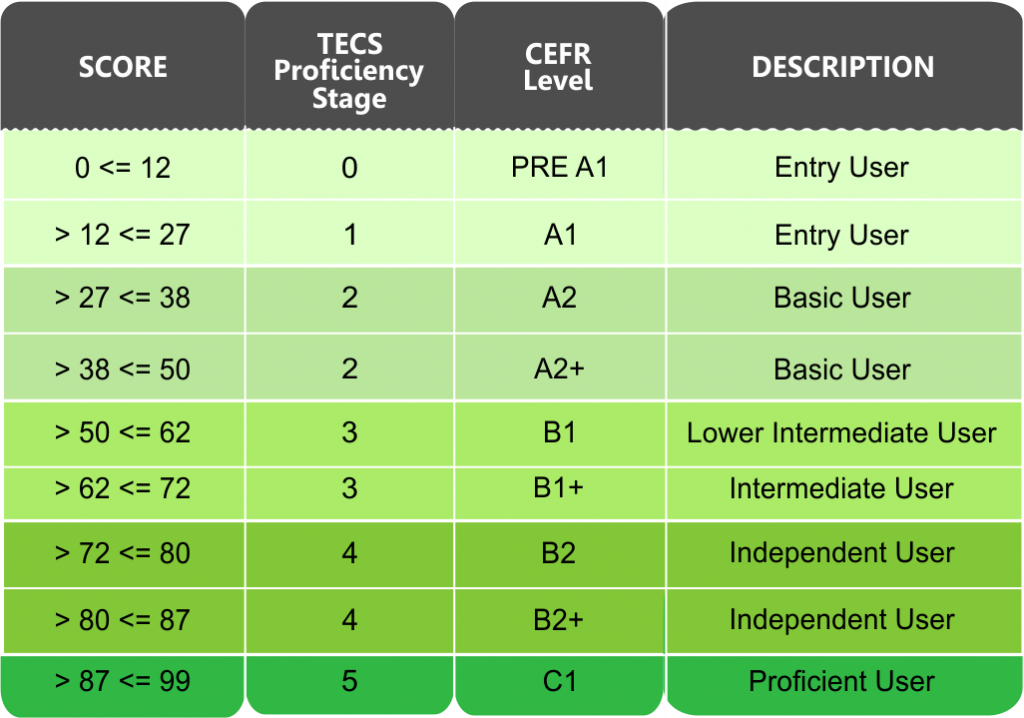